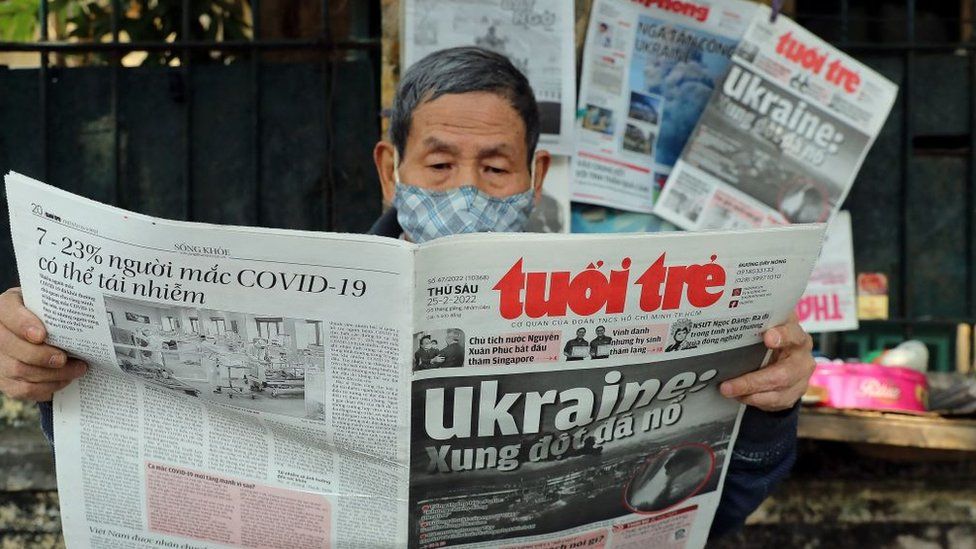 The state has complete control over all print and broadcast media, and the Communist Party has a firm grip on it.

According to Freedom House, journalists and bloggers are restricted by repressive laws. Reporters and commentators who raise contentious issues run the risk of being physically attacked and intimidated.

According to Reporters Without Borders (RSF), bloggers and citizen journalists are the only sources of independent news. But "ever-harsher forms of persecution" are imposed upon them.

The main media is television. Only one national network, operated by Vietnam Television (VTV). Some foreign TVs are available on VTV-owned satellite and cable pay TV platforms.

With output in English and other languages, VoV 5 is one of the radio networks operated by the Voice of Vietnam (VoV).

There are countless newspapers and magazines. According to Freedom House, almost all are owned by, or under the control of, the Communist Party, governmental entities, or the military.

Political dissent and other content deemed to pose a threat to Communist rule are blocked. Freedom House reported in 2018 that systematic content removal censorship has taken place. According to the NGO, hundreds of accounts accused of disseminating "reactionary, anti-Party" content had been deleted with the help of Facebook and the assistance of the authorities.

A cyber security law that went into effect in 2019 mandates that international online platforms establish local offices and keep their user data in Vietnam.

According to Internetworldstats.com, 84 million people—or 89 percent of the population—used the internet in July 2022.