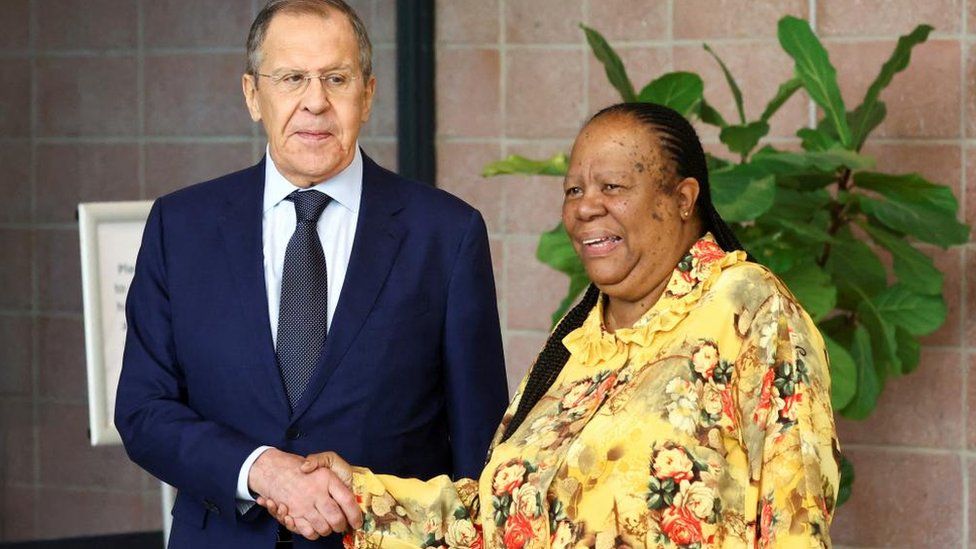 South Africa has defended its choice to participate in a joint military drill with Russia and China the following month.

The "double-standard" that states some countries can conduct such exercises but not others was denounced by foreign minister Naledi Pandor.

Dr. Pandor continued, "All nations engage in joint military drills with allies around the world.".

The remarks were made during a press conference in Pretoria with Sergei Lavrov, the foreign minister of Russia.

A few protesters holding Ukrainian flags gathered outside the venue for the event.

Further criticizing the idea that South Africa cannot conduct the military drills it desires as an "abuse of international practice," Dr. Pandor continued.

This is just a normal series of exercises that take place between nations, she said.

The military of South Africa revealed last week that joint naval exercises would be held with China and Russia off its coast the following month.

On account of the exercise falling on the first anniversary of Russia's invasion of Ukraine, there have been some complaints that it is inappropriate.

The planned exercises have also been defended by the Ministry of Defense, which noted that South Africa has previously hosted similar drills with the US, France, and other Western Nato member states.

The drills will take place in the port city of Durban and Richards Bay for ten days, from February 17 to February 27.

The South African National Defence Force stated that the goal is to exchange operational expertise and knowledge.

South Africa has refused to condemn the Russian invasion despite pressure from Western nations, much to Ukraine's dismay.

Speaking at the conference, Mr. Lavrov said he appreciated South Africa's "well balanced" and "considerate" approach to the Ukraine war, which South Africa's Dr. Pandor said needed to be resolved diplomatically and through negotiation.

South African officials have repeatedly stated that they do not support the invasion but will not be pressured to take a side and will continue to conduct business as usual with both nations.

South Africa has been criticized for taking a soft stance.

The relationship between the leaders of South Africa and Russia dates back to the struggle against white minority rule, or apartheid, when some members of the nation's liberation movement received military training there.

Through the Brics group of emerging economies—Brazil, Russia, India, China, and South Africa—that relationship has recently developed into business ties.

In July 2022, Mr. Lavrov traveled to Africa and made stops in Egypt, Ethiopia, Uganda, and Congo-Brazzaville. South Africa is not the only country that has refused to support a side in the conflict in Ukraine.

Numerous African countries, including Nigeria and Kenya, the economic titans of West and East Africa, respectively, supported a UN general assembly resolution in March of last year that denounced Russian "aggression" and called for its withdrawal from Ukraine.

But 17 of the abstentions, or nearly 50%, came from Africa, including South Africa.