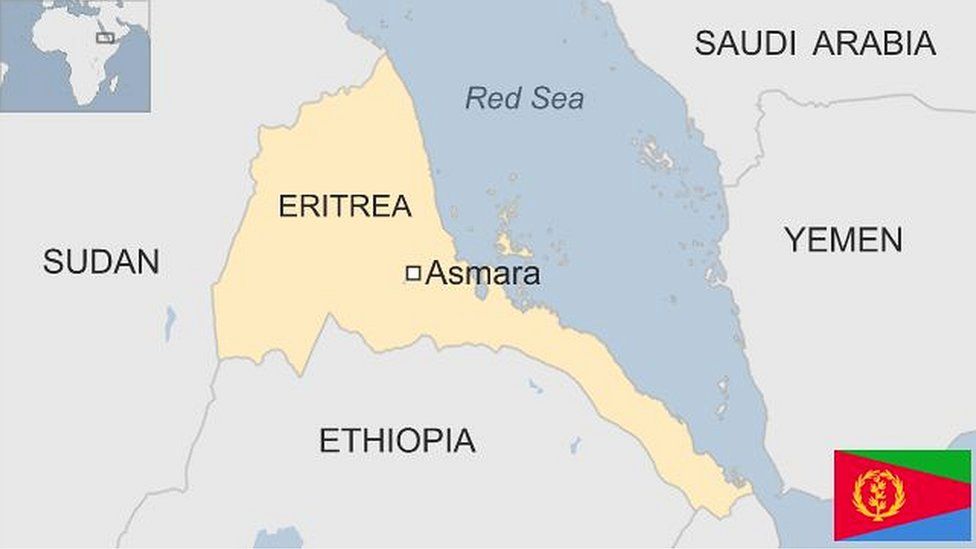 Despite achieving independence from Ethiopia in 1993 following a 30-year war, Eritrea has struggled with domestic repression and tense relations with its neighbors.

It is situated in the Horn of Africa, bordered by Sudan, Ethiopia, and Djibouti, and it is a strategically significant region.

Up until 2018, when Ethiopia launched a surprise diplomatic initiative that formally ended the state of war between the two countries, tensions over the closed and heavily fortified border remained high.

The government has attempted to use the threat of war with Ethiopia to justify Eritrea's one-party system and highly militarized society.

Eritrea continues to be one of the poorest nations in Africa as a result of protracted periods of conflict and severe drought.

According to UN estimates, a large number of Eritreans have emigrated from their country in recent years, risking their lives to cross the Sahara and the Mediterranean to reach Europe.

Since Eritrea's independence from Ethiopia in 1993, President Isaias Afwerki has been in charge. Only his People's Front for Democracy and Justice (PFDF) is a political party.

A constitution that was ratified in 1997 has never been put into effect, and planned presidential elections never happened.

He joined the struggle for independence from Ethiopia in 1966 and later founded and served as the leader of the Eritrean People's Liberation Front. When the Front overcame the forces of the Marxist Ethiopian government in 1991, he was appointed head of the interim administration.

He was chosen to lead both the executive and legislative branches of government after the independence referendum in 1993.

There isn't any media outside of the broadcasters and newspapers that the government controls.

Given that all media access and publications are tightly regulated by the government, Reporters Without Borders ranked Eritrea as having the worst overall press freedom in the world in 2021—even worse than North Korea.

Alternative news sources are provided by outlets run by Eritreans abroad, but their reach is restricted due to a lack of internet access, among other factors.

Islam is first practiced in coastal regions around 600.

Ottoman Turkish garrison is established at Massawa on the Red Sea coast in the 1500s.

A colony of Eritrea is declared by Italy in 1890.

In 1949, Britain took over management of Eritrea as a United Nations trust territory.

Eritrea becomes a federal part of Ethiopia after a vote by the UN General Assembly in 1952.

Founded in 1958, the ELF stands for Eritrean Liberation Front.

When Ethiopia annexes Eritrea in 1962, the independence movement and the 30-year war for independence gain momentum.

1991 - The Eritrean People's Liberation Front takes control of Asmara, the nation's capital, and establishes a provisional administration. Toppling Mengistu Haile Mariam is a goal of the EPLF and its allies in the Ethiopian rebel movement.

Enormous numbers of Eritreans vote in favor of independence in 1993.

Democratic constitution is drafted in 1997, but it is never put into action.

Around 70,000 people die in the war that breaks out between 1998 and 2000 between Eritrea and Ethiopia on their shared border.

In response to IGAD member states' support for Ethiopia's intervention in Somalia, Eritrea leaves the regional organization in 2007.

Fighting breaks out between Djiboutian and Eritrean forces in the contentious Ras Doumeira border region in 2008. At least nine Djiboutian soldiers were killed. Eritrea denies attacking, despite US condemnation.

2009 - Eritrea is sanctioned by the UN for allegedly supporting Islamist insurgents in Somalia.

The border dispute between Eritrea and Djibouti will be settled peacefully in 2010.

2016 - The UN Human Rights Council requests that the African Union look into claims that Eritrean leaders have committed crimes against humanity.

After diplomatic efforts by Ethiopia, the state of war between Ethiopia and Eritrea was ended in 2018. Eritrea's sanctions against it by the UN Security Council have been lifted after allegations that it supported jihadists in Somalia known as al-Shabab.