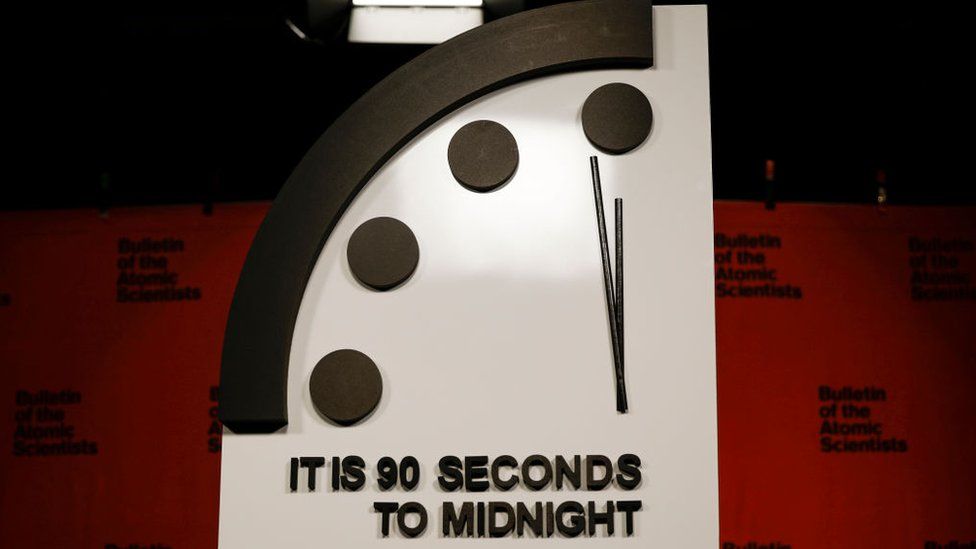 The Doomsday Clock, which represents how close humanity is to a catastrophic event, has moved closer than ever to midnight.

The timer is set to 90 seconds until midnight to symbolize how close human activity has brought our planet to total destruction.

According to the Bulletin of the Atomic Scientists (BAS), the war in Ukraine played a significant role in the clock's movement.

To alert people to the risks of nuclear war, the concept was first proposed in 1947.

Depending on the scientists' assessment of existential threats at a particular time, the clock's hands are shifted toward or further away from midnight. Theoretically, annihilation occurs at midnight.

The BAS science and security board, which is comprised of 13 Nobel Laureates, makes the choice. This year, due to the conflict in Ukraine, the announcement was also made available in Ukrainian and Russian in addition to English.

The board claimed that the conflict had brought up important issues regarding how countries interact and that there had been a noticeable decline in international relations.

It stated that "Russia's barely veiled threats to use nuclear weapons remind the world that escalation of the conflict - by accident, intention, or miscalculation - is a terrible risk.".

The other dangers mentioned this year include disruptive technologies, biological dangers, and climate change.

The statement read, "The effects of the war go beyond a rise in nuclear threat; they also undermine international efforts to combat climate change.".

The board also stated that leaders around the world will need to keep identifying and addressing biological risks, whether the origin is natural, accidental, or intentional, as the world deals with the effects of Covid-19.

The board opined that a pandemic is no longer a risk that only occurs once in a lifetime.

At 17 minutes until midnight, immediately following the Cold War's end, the clock hands were the furthest apart they had ever been.

Although people caused these issues, according to Bulletin of the Atomic Scientists CEO Rachel Bronson, the board also thinks people can lower the risks through international cooperation.