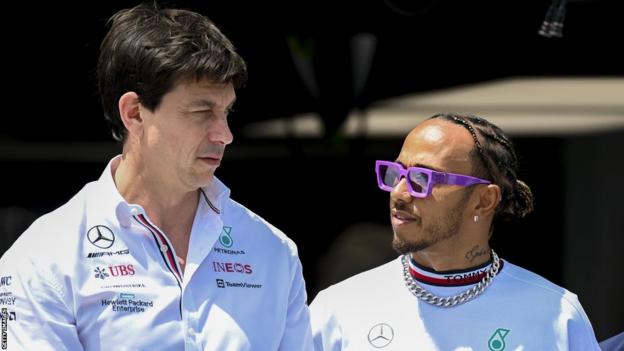 Lewis Hamilton claims that he was frequently the target of racial taunts at school and that he once had bananas thrown at him.

The 38-year-old Mercedes driver claims that his time in school was "probably the most traumatic and difficult period of my life.".

At the age of six, bullying had already started, according to Hamilton.

I was one of only three students of color at that particular school, and I often found myself being thrown around by bullies and bigger, stronger kids. ".

The seven-time Formula 1 champion described a number of racially offensive terms he was called at school in an interview with the On Purpose podcast.

"For me, that was challenging," Hamilton continued. "Not knowing where you fit in.

"When you enter a history class and discover that there are no people of color in the history that is being taught to us. Where are the people who resemble me? was what I was wondering.

"Out of 1,200 students, there were six or seven black students in my [secondary] school, and three of us were constantly placed outside the headmaster's office. We were the target of the headmistress's animosity, especially me.

"I felt like the system was working against me and that I was swimming against the current. There were many things I kept inside.

"I didn't feel like I could go home and tell my parents that these kids kept calling me [racist terms], or that I got bullied or beat up at school today. I didn't want my father to believe that I lacked strength. ".

Hamilton has started a campaign in recent years to broaden the diversity of the racing industry.

He created a commission to investigate the reasons why racial and ethnic minorities are underrepresented in the sport, launched his Mission 44 initiative to consider ways to assist young people from underserved communities, and is collaborating with Mercedes to broaden diversity both within their team and in Formula One.

March marks the start of Hamilton's 17th F1 season, and he is entering the final year of his most recent Mercedes contract.

Earlier this month, team owner Toto Wolff expressed his confidence that Lewis Hamilton would accept a new contract to continue competing after this year.

Wolff stated, "We still have a full year to go.". "Our relationship has developed over the past 10 years, and we are completely in sync.

"It's just a matter of him physically being back in Europe, putting our heads together, engaging in some light fighting, and then, after a few hours, leaving the room with white smoke.