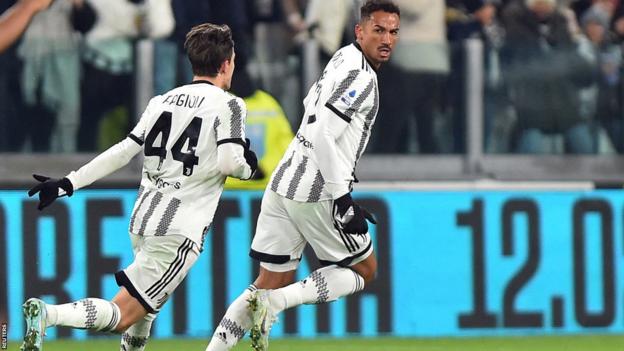 In their first game following a 15-point deduction for transfer violations, Juventus rallied to tie Atalanta.

Atalanta took the lead early on thanks to a goal from Ademola Lookman, but Juve responded to take the lead at the half thanks to goals from Arkadiusz Milik and Angel di Maria.

In the first minute of the second half, Joakim Maehle restored the deficit before Lookman scored again with a skillful header.

When Danilo arrived from outside the area, Juve, however, leveled.

Atalanta now sits in fifth place after the result, while Juve, who had dropped to ninth after the points deduction, now sit in tenth.

The Serie A anthem was booed by some Juventus supporters just before the game began, and they witnessed their team make a poor opening when goalkeeper Wojciech Szczesny let Lookman's shot slip through his hands at the near post in the fifth minute.

After Nicolo Fagioli was fouled, the home team rallied and tied the score at the halfway point of the first half when Angel Di Maria converted from the spot-kick to beat Atalanta goalkeeper Juan Musso.

Di Maria, a World Cup winner, was also involved when Juve took the lead. His brilliant flick close to the touchline helped create the opportunity for Milik's volleyed finish.

Atalanta fought back, scoring twice in the first eight minutes of the second half, the first coming just 60 seconds after the break when Maehle rolled the ball in after Lookman's skillful pass.

The former Everton, Fulham, and Leicester forward scored his second goal of the evening and his 11th of the season shortly after, guiding a beautiful header in as he backed away from Szczesny.

When Di Maria backheeled at a free kick, the Atalanta defense was caught off guard, and Danilo had a chance to drive his shot low past Musso.