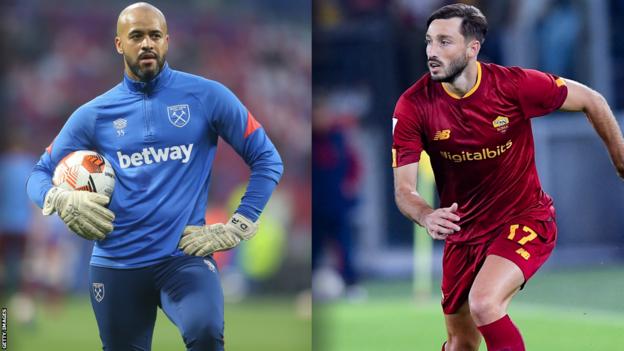 In addition to acquiring defender Matias Vina on loan from Roma for the remainder of the season, Bournemouth has also agreed to acquire goalkeeper Darren Randolph on a permanent basis from West Ham.

Only 10 first-team appearances have been made by Randolph since he transferred from Middlesbrough to West Ham in January 2020; the most recent was in May 2021.

The 35-year-old's deal with the Hammers still has 18 months to run.

He had little chance of playing for the senior team at London Stadium, though.

By deciding to accept the offer to play for Bournemouth, he will put first-choice goalkeeper Neto, who recently made a comeback from a hamstring injury, up against competition.

Vina was a member of Uruguay's World Cup team, but since returning from Qatar, he has not played for Roma and has only started one Serie A game this year.

The 25-year-old left-back adds more experience to Gary O'Neil's team, which Bill Foley, the club's new owner, has vowed to bolster before the transfer window closes in an effort to stave off relegation.

Randolph and Vina might be included in the Bournemouth roster for the Premier League trip to Brighton on February 4 if their transfers are successful.

After agreeing to a 23 million euro (£20 point 3 million) deal with Villarreal on Tuesday, the Cherries are also close to signing Senegal forward Nicolas Jackson.

Dango Ouattara, a Burkinabe winger who joined them from Lorient in France for about £20 million, made his debut against Nottingham Forest on Saturday.

On our dedicated page, you can find the most recent football transfers.