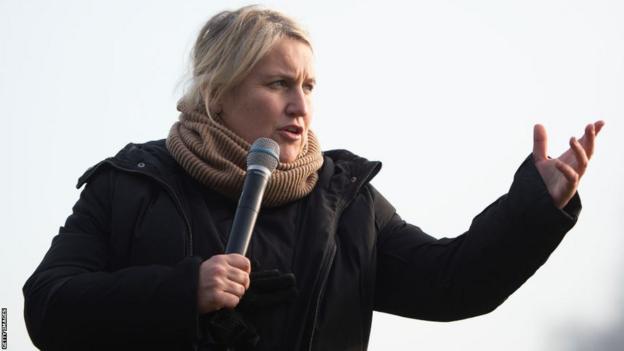 According to Chelsea manager Emma Hayes, the Women's Super League needs to find a solution to stop games from being postponed due to frozen fields.

On Sunday, their WSL home game against Liverpool was called off after six minutes due to unsafe field conditions.

After an earlier pitch inspection, the game -- which was broadcast live on BBC Two -- began at 12:30 GMT as scheduled.

However, when it became clear that the field was unplayable at Kingsmeadow Stadium, referee Neil Hair removed the teams.

"To prevent frozen pitches, we have heaters and pitch covers. We'll need a different solution if they don't complete that task, according to Hayes.

"That's not my job; the league and the clubs should take care of that so that we never have to postpone games," the referee said. It's something I've been saying for years: postponing games hurts our sport.

"We should all strive to do whatever it takes to prevent games from being canceled six or seven minutes into them for fans traveling across the nation. ".

The choice to kick off endangered the players' safety, according to Liverpool manager Matt Beard on Sunday.

The sequence of events, which began with a 09:30 pitch inspection and culminated with players tripping over and Hayes addressing disgruntled fans, was criticized by managers, pundits, and players on social media.

When asked if clubs should spend money on undersoil heating, Hayes responded, "In general, if this is the top division for women's football, then we should be afforded exactly the same opportunity.".

"This isn't about Chelsea; it's about women's football and being able to do all of that without having equal access to things for a long time.

"Someone brought up the fact that undersoil heating is not eco-friendly, so in a perfect world you might have an eco-friendly field so you can compete in the top division. ".

On Wednesday at Leyton Orient's Brisbane Road, Chelsea will play Tottenham in the Continental Cup quarterfinals, though there will be a pitch inspection first. external-link.

The quarterfinal match between WSL rivals Arsenal and Aston Villa is scheduled for Meadow Park on Thursday. Arsenal revealed they had "investigated the possibility" of holding the game at Emirates Stadium but it was "not feasible due to essential pitch maintenance.".

On the day of the game, at 12:00 GMT, the Gunners announced that the pitch would be inspected.