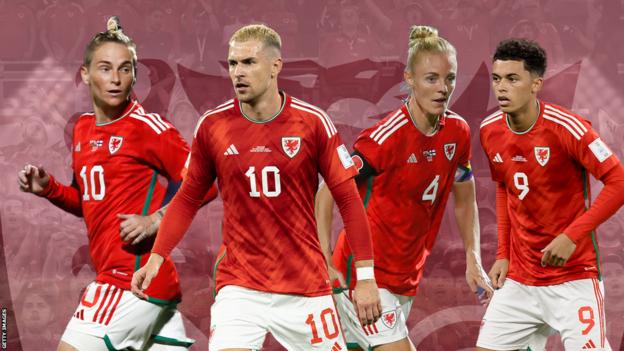 Wales' senior male and female players will receive the same compensation for their first international appearance.

Equal pay will go into effect right away thanks to a deal reached with the Football Association of Wales [FAW].

The senior men's team for Wales has agreed to take a 25% pay cut so that the women's team can receive a 25% pay increase, creating parity for Wales' representation.

Gemma Grainger, the head of Wales, said, "I am really happy about the equal pay; it is about equality.

The men's and women's teams for Wales said in a joint statement that "Together Stronger has been the mantra across the Cymru national teams for us all, both on and off the pitch as we look to put Wales on the world stage.".

The FAW is pleased to announce that the men's and women's teams have reached an agreement on an equal pay structure for upcoming international competitions.

"We hope that this will show younger boys and girls that there is equality in Welsh international football, which is significant for society as a whole. ".

By 2027, the new equal pay agreement will have expired.

Wales' female football players have never received the same compensation as Wales' male players for playing international football, but Grainger, who recently signed a new contract to lead the national team until 2027, claims that paying her team equally will send a strong message.

She said to BBC Sport Wales, "We want our players to embody Together Stronger; the collaboration with the men's team is something we want to continue.".

"I'm hoping that the collaboration will develop further.

"We place a lot of importance on equality and making sure that everything we have here is equal. The female game is expanding and will do so in the future. ".

Wales joins other nations in paying their players the same international match fee, including the United States of America, England, Brazil, Australia, Norway, and New Zealand.

Following a breakdown in negotiations over equal pay and conditions, the Scotland women's national football team has decided to file a lawsuit against the Scottish FA.

Since November 2021, negotiations have been underway to reach a new pay agreement that will provide parity for women in Wales.

The senior leadership group of the Wales women's team, which includes the most-capped player in Wales, Jess Fishlock, the women's captain, Sophie Ingle, and the leading scorer in Wales history, Helen Ward, has been in ongoing discussions with FAW chief executive Noel Mooney.

The men of Wales, led by Robert Page, unanimously agreed to reduce their international match fee in order to hasten an agreement on equal pay.

The FAW, according to Mooney, "is a contemporary, progressive movement that seeks to improve every day.".

We thank the men's and women's squads for their excellent cooperation in achieving this agreement, which is another step toward becoming one of the greatest sports organizations in the world. ".

Since before its incredibly successful 2016 men's European Championship run, Wales has used the slogan "Together Stronger.". That catchphrase can finally be said to be true.

Together Stronger has special meaning for Wales' fans, Cymru's Red Wall, as Welsh football has recently experienced a resurgence and a vibrant fan culture. Wales, which is renowned for being a rugby-playing nation, is currently covered in bucket hats.

Together Stronger, however, has only ever been an extremely successful advertising slogan up until this point. It can now be considered an ethos in all seriousness.

The FAW is now demonstrating to the world that they value the women's team equally to the men's team, in addition to keeping their word to continue doing everything they can to promote the women's game, which is already bringing in record revenues in Wales.

The Wales men's team's decision to reduce their match fee has significance because it demonstrates their support for what will hopefully be a significant change in Welsh sport.

Increased participation and record crowds for Gemma Grainger's team demonstrate the explosion in popularity of women's football in Wales.

Wales' youth receive a crystal-clear message. Wales values the next Sophie Ingle and the next Aaron Ramsey equally.