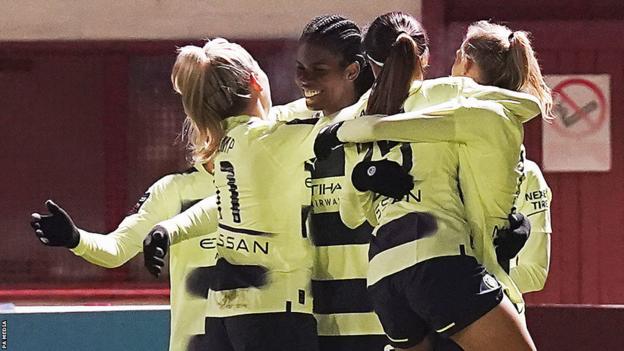 Long stretches of the game were spent entirely in the West Ham half, but the home team did have opportunities and must still be perplexed as to why an epic scramble in the City penalty area did not result in the game's first goal after 25 minutes.

Paul Konchesky's team pushed hard for an equalizer in the second half, but City appeared to be in the better position to score late.

Shaw's stabbed shot bounced off the post, and Hammers goalkeeper Mackenzie Arnold made a good reaction save to stop Castellanos.

With the victory, City's 11-game winning streak in all competitions was extended, and they closed the gap on third-place Arsenal.

Due to back-to-back losses to open their WSL campaign, City is currently playing catch-up this season as Chelsea, Manchester United, and Arsenal are far ahead.

However, they haven't lost since losing 2-0 to Chelsea in late September, and after Arsenal and league leaders Chelsea drew 1-1, they are now only six points behind the leaders with a game remaining.

Leila Ouahabi cleared Grace Fisk's shot off the line during a goalmouth scramble, and Ellie Roebuck then made a save on Risa Shimizu after Gareth Taylor's team lost focus at a throw-in to keep the score level despite the visitors' dominance in the first half.

Chloe Kelly and Lauren Hemp, both of England, had been the threat on the wings just before the break, but when the goal was scored, it was like an arrow straight through the West Ham defense.

Two West Ham players were eliminated by Yui Hasegawa's incisive pass, and Castellanos eliminated the remaining players by opening up her body and sliding a perfectly weighted through ball into Shaw's path.

It took a goal of the highest caliber to penetrate the tenacious West Ham defense, and even though Shaw had a chance to ease the tension in the closing seconds, one goal was sufficient to keep City in the mix with the teams above them.