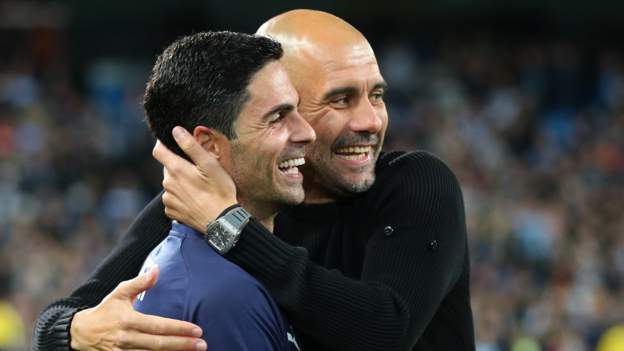 Mikel Arteta, the manager of Arsenal, says he would "prefer" not to face Pep Guardiola in a race for the Premier League championship.

They both worked for Manchester City, where Arteta served as Guardiola's assistant before departing to manage Arsenal in 2019.

In pursuit of their first championship since 2004 when they went the entire league season unbeaten, the Gunners are currently in first place, five points ahead of City, the defending champions, with a game remaining.

It's a strange feeling, Arteta said.

Sincerely, I want the best for him, but when dealing with someone like this, something gets in the way, he continued.

Arteta has enjoyed how Arsenal are now competing with City for trophies, even though he had to face off against his friend.

The 40-year-old former midfielder for the Gunners said, "I always hoped that would be the case one day, and it is this season.

That won't change our friendship, our special moments together, or how significant he is to me personally and professionally.

"From the very beginning, we have both been ready to fight for and win for our clubs.

Friday's FA Cup fourth-round match between Arsenal and City is the first of three games between the teams this season; the other two are scheduled for February 15 and April 26 in the Premier League.

In his first season as manager in 2019–20, Arteta guided the Gunners to a record 14th FA Cup victory.

And he added that the match at the Etihad could be pivotal for both teams this season.

Arteta continued, "It is a competition that is very important to us, very attached to our club and history, and will undoubtedly define a moment.

With Mohamed Elneny out indefinitely with a knee injury, Arteta claimed they could still sign a midfielder this month.

If possible, he continued, "We need some more midfield cover. It's difficult to do that in this market.

"It's crucial that we use the players we have on hand who are already excellent to deliver the performances and playing time we require.