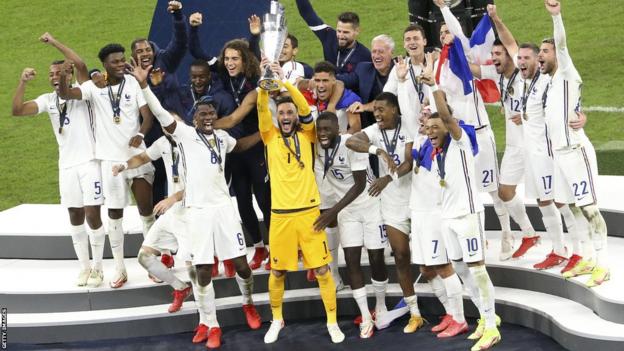 According to Uefa, a revised Nations League will become a "more compelling" competition with the addition of quarterfinals and promotion play-offs.

Sept. 2024 will mark the start of the new expanded format.

There will still be groups of four, but for the top 16 League A teams, a two-legged quarterfinal in March 2025 will pit the group winners against the runners-up, with the top two qualifying for that round.

These matches' winners will advance to the "Final Four" in June 2025.

The League A group's fourth-place team will once again be relegated, as is the current format.

For the 2024–25 competition, Scotland has been elevated to League A, while England and Wales have been demoted to League B and League C, respectively.

The qualification process for the 2026 World Cup and the 2028 Euros will be altered as a result of the modified format.

As their qualification campaign cannot start until September 2025, nations that make it to the "Final Four" will be put in a four-team group.

The actual qualification process will start in March 2025, but only with five-team groups and only with nations not currently taking part in the Nations League.

The changes, according to Uefa, won't have an effect on the current international calendar and would be compatible with any modifications made to it by world governing body Fifa.

That only holds true, though, if Fifa sticks to the number of dates that are currently offered to the organization that governs football in Europe.

Portugal and France have thus far prevailed in the Nations League, which was first introduced in 2018.