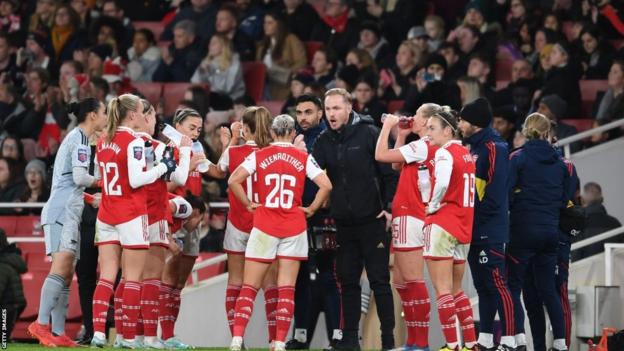 In light of growing calls for clubs to have undersoil pitch heating, Arsenal manager Jonas Eidevall advises against making "emotional" decisions about investments in women's football.

Due to a frozen Kingsmeadow pitch, Sunday's Women's Super League match between Chelsea and Liverpool was called off after six minutes.

After kickoff, the field seemed dangerous despite an earlier inspection.

The simple solution, according to Eidevall, is to attempt to fix the current topic.

"I completely concur with [Chelsea manager] Emma Hayes that trying to play that game and what transpired was really bad for the league.

"But when we take a closer look, we need to really understand what the priorities should be with investment; we can't make the decision based solely on the fact that there was a problem yesterday.

"We need to make wise choices about where to put our money in order to expand the game over time, and I highly doubt that undersoil heating should be one of those choices right now. ".

The WSL must find a solution, according to Hayes, who stated on Monday, to avoid postponing games.

She continued, "In general, if this is the top division for women's football, then we should be given exactly the same opportunity," when asked if clubs should invest in undersoil heating. ".

The Continental Cup quarterfinal match between Arsenal and Aston Villa is scheduled for Thursday at 19:45 GMT at Meadow Park, but the pitch will be inspected at midday first.

Arsenal stated in a statement that the club had "looked into the possibility of playing at Emirates Stadium, but this was not feasible due to essential pitch maintenance.".

When questioned on Wednesday morning, Carla Ward, the manager of Aston Villa, responded that she had "every confidence the game will go ahead.".

She continued, "There's only one question that wasn't asked, and it shouldn't have been about undersoil heating, but who put those players in danger?".

For me, the more important question is: "Whose decision was it to put those players in danger? ".

The manager of Arsenal, Eidevall, urged clubs to look into "short-term solutions" to stop postponements until long-term solutions were chosen, emphasizing the importance of communication.

"Fans save time and money by not having to travel to games when there is early communication. Additionally, I believe it spares us from missing out on the images we saw from Chelsea vs. Liverpool from a league perspective," he added.

"It was really bad publicity for women's football in general and the WSL in particular. How do you resolve that in the long run?

"I believe you need to prioritize your spending and consider all the investments you must make in the game. You would like to invest in the women's game in so many different ways right now.